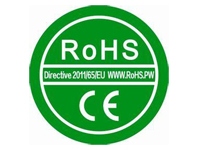 After the EU RoHS Directive (2002/95 / EC, Restriction on the Use of Certain Hazardous Substances in Electronic and Electrical Products) was officially implemented on July 1, 2006, it caused a huge impact worldwide and set off in the electronic and electrical industry. The prelude to a product green revolution.

After undergoing the revision process for nearly three years, on July 1, 2011, the European Union officially issued the 2011/65 / EU directive (RoHS 2.0) in its official gazette to replace the original directive. The new RoHS directive was formally implemented on January 3, 2013. Although the new directive maintains the requirements of the original six hazardous substances, four substances (HBCDD, DBP, BBP, DEHP) have been selected as candidates for the new restricted substances.

NTEK is equipped with complete testing equipment and experienced testing technicians, which can provide you with the testing services of six hazardous substances of RoHS directive and four priority assessment substances of RoHS2.0.

On June 4, 2015, the official version of the RoHS 2.0 directive was officially released through the official website of the European Commission, which is mainly modified for Appendix II. Four new restricted substances were added: DEHP, BBP, DBP, DIBP, and their limits were all 0.1wt% ( 1000ppm), the directive officially entered into force on June 24, 2015, that is, the standard test items of the RoHS 2.0 directive have accumulated to 10 restricted substances.

The management and control method of China RoHS is divided into two steps:


The first step is post-market management, which requires that from March 1, 2007, electronic information products that are placed on the Chinese market must make self-declarations in accordance with the "Requirements for Pollution Control Labeling of Electronic Information Products".

NTEK is equipped with complete testing equipment and experienced testing technicians, which can provide you with China RoHS hazardous substance testing services.