Polymer battery is also called lithium polymer battery (Li-polymer), also known as polymer lithium battery. It is also a type of lithium-ion battery, but it has many obvious advantages such as high energy density, smaller size, ultra-thinning, light weight, and high safety compared with liquid lithium batteries (Li-ion). New battery. In shape, lithium polymer batteries have ultra-thin characteristics, which can be made into batteries of any shape and capacity to meet the needs of various products. The minimum thickness that this type of battery can reach is 0.5mm. Its nominal voltage is the same as Li-ion's nominal voltage of 3.7V and has no memory effect. 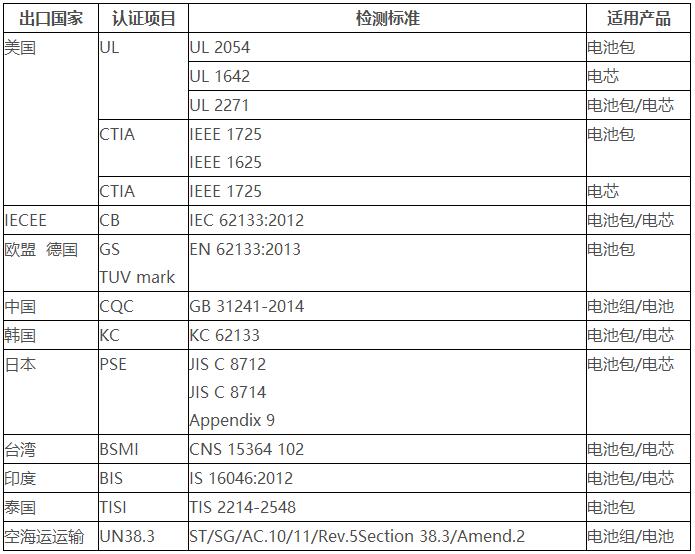 1. Constant humidity and heat performance
After the battery is fully charged, it is placed in a constant humidity and heat box with a temperature of 40 ± 2 ° C and a relative humidity of 90-95% for 48 hours. The battery is taken out and left for 2 hours at a temperature of 20 ± 5 ° C. Visual inspection Appearance of the battery, the discharge time is 200mAh, there is no obvious bulging, rust, smoke, the discharge time is ≥36min
2.Vibration experiment
After fast charging, install the battery on the table of the vibration table, and scan the vibration from 10-55Hz for 30 minutes in the three directions of X, Y and z according to the following frequency and amplitude, and the scan rate is loct / min.
Vibration frequency: 10 ~ 30Hz, single amplitude 0.38mm;
Vibration frequency: 30 ~ 55Hz, single amplitude 0.19nmm;
Requires no apparent damage, cracking, liquid leakage, etc., and the cell voltage is ≥3.6V;
3. Collision experiment
After the battery cell is tested according to 4.2, the battery cell shall be fixed on the table surface in the axial direction of x, Y, and Z on the average, and the experiment shall be performed according to the following requirements:
Pulse peak acceleration -100m / s2;
The number of collisions per minute is -40 ~ 80;
Pulse duration: -16ms;
The total number of collisions is -1000 ± 10;
It is required that the appearance of the battery cell has no obvious damage, cracking, leakage, etc., and the voltage of the battery cell is ≥3.6V;
4. Free fall
After fast charging, drop freely on an 18-20mm thick hardwood board placed on the concrete floor at a height of 1m. After dropping from the X, Y, and Z directions once, perform a charge and discharge cycle, and record the discharge time at 200mA.
Requires no obvious damage, cracking, liquid leakage, etc., discharge time ≥51min

Consultation Get a quote
Cylindrical battery testing and certification 无